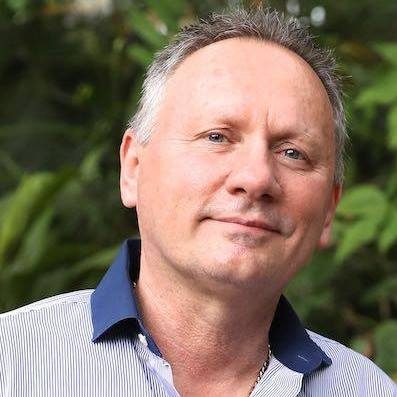 
Robert G. Smith is the creator of Eutaptics and Faster EFT.

He is a Life Coach, a respected leader in the field of personal growth, a popular radio guest and sought after speaker. He is one of America’s leading experts on stress, spirituality and healing. Robert has reached thousands of people with his positive message about personal power, love and healing with the largest free online healing library available on YouTube with about 10 million views and counting, and translated in 14 different languages. He’s traveled all over the world giving public seminars since 2002.

We can assume that Eutaptics is an evolution of Robert G. Smith’s Faster EFT. However, as the modality matures, addition and changes to the system is necessary to cater to the needs of the modern people. It is not simply a matter of re-branding. In fact, it is a much needed change to help us better reach the demands of a much bigger arena while not being confused with regular EFT or any other brands that do not operate within the same belief system.

What is new to the system is the development of techniques appealing to the new generation. And additions on stress management that tackles greater issues in Corporate and Entrepreneurial Stress. It is a hybrid version of FasterEFT that is made more available to all walks of life on a global scale.

Eutaptics and Faster EFT Eutaptics is a thinking and healing system developed by Robert G. Smith utilizing tapping across Recommended Meridian Points to re-imprint memories that are  producing problems.

Providing highly effective skills to improve an individual’s quality of life, Eutaptics wish to influence our society as a whole. It is a system designed to allow psychological stability by reprogramming the brain’s mental patterns to positively impact our responses and behavior towards life.

Eutaptics operates with tangible physical mechanics backed by science. The processes involved including the core belief system is rational and logical. Delivering only techniques that are driven to produce positive results.

Eutaptics as a stress management system boasts that it can reduce and eliminate Harmful physical and psychological effects of anxiety, depression, chronic pains, fears, phobias and addictions. While training programs and courses focused on personal development can improve an individual’s self-esteem and also resolve weight issues and emotional overeating. Coping skills found in Eutaptics works well with grief and loss as well as maintaining a flexible and happy brain.

Evolving from the most effective elements of Emotional Freedom Techniques, BSFF (Be Set Free Fast), science, Hypnosis and Neuro-Linguistic Programming or NLP, it is a complete system that promotes the ability of the mind to heal and produce health and wellness.

At its core, it is a personal development tool that allows positive changes on problematic thought processes the resides within deeper consciousness. It is a complete and mature system that allows congruence with unconscious mind to resolve life issues manifesting as illnesses and problems. The memories supporting the structure of the problem is aimed to be weakened and collapsed by releasing emotions through the use of the tapping process accompanied by specific questions. The process and technique allows immediate positive changes in the person’s mental state thus producing healthy responses and habits.

What is Eutaptics and why was it created? The evolution of FasterEFT

Are you ready to create your best life?

Get Started Now
https://fastereft.com/blog/eutaptics-boost-minds-ability-produce-health-wealth
End of Eutaptics and Faster EFT